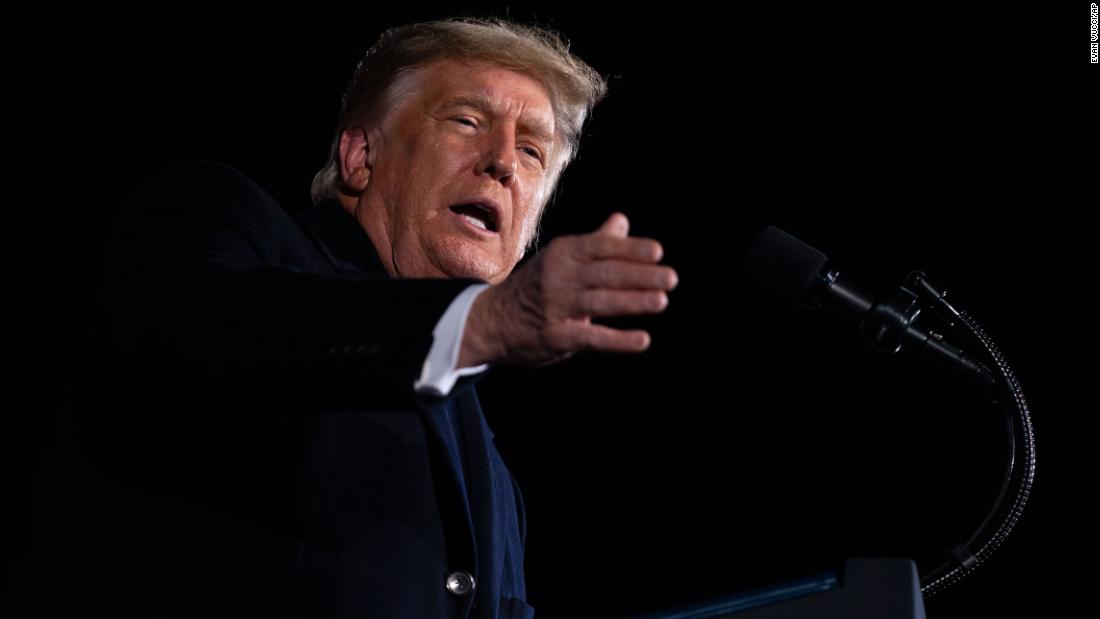 But as usual, and as it has been for the last four years, including during the fast-worsening pandemic that he ignored, the outgoing President’s primary concern was himself.

“By the way, there is no way we lost Georgia, that was a rigged election,” Trump said, in the first, inaccurate words out of his mouth after disembarking from his Marine One helicopter, before broadening his disinformation to the November 3 election as a whole.

“When you win in a landslide and they steal it and it’s rigged, it is not acceptable,” Trump said, in an embittered screed, rooted in false claims that he prevailed in an election President-elect Biden won 306-232 in the Electoral College.

Though he often wove GOP Sens. Kelly Loeffler and David Perdue into his remarks — and warned of the dangers of a Democratic monopoly of power in Washington if they lost –the President’s appearance was essentially a wild, on stage, prime time TV version of Saturday’s call in which he leaned on Georgia state officials to conjure votes out of thin air in order to discredit Biden’s already certified Peach State victory — a flagrant, and possible unlawful abuse of power.

The President’s rants on Monday night contrasted sharply with the stunning point-by-point denunciation of his case by a top GOP election official who used facts and evidence to dismiss false claims of electoral corruption.

“This is all easily, provably false. Yet the President persists,” Gabriel Sterling, the voting systems implementation manager for the Georgia secretary of state’s office, said in a calm, reasoned news conference on Monday.

Trump created a nightmarish picture of a ranting, demagogic commander-in-chief, wallowing in fantasies of the political fringe — a frightening prospect since he retains the awesome powers of the presidency for another 15 days.

But he failed to explain how exactly he planned to overturn the constitutional process that will make Biden president, an omission that will bolster the impression he’s doing everything he can to tear down America’s faith in democracy in a final act of revenge.

Trump and Republican acolytes who are trying to thwart the certification of the election by Congress on Wednesday are essentially trying to pull a massive con trick on the American people. After scores of Republican-appointed judges, the US Supreme Court and GOP state officials summarily rejected the truth of his false claims of fraud, they are arguing that their constitutional larceny is justified because millions of Trump voters believe their lies about a stolen election.

The logical extension of Trump’s case and comments, since he has not offered credible evidence of a rigged election, is that when Republicans lose it must be because Democrats cheated — whatever the truth of the situation.

There are some in the party who still stand for truth. In an extraordinary act, Sterling — a state government official who was unknown on the national stage before November — went on national TV to contradict the President.

“The reason I’m having to stand here today is because there are people in positions of authority and respect who have said their votes didn’t count, and it’s not true,” he said.

Sterling is an example of the many courageous and principled Republican officials who stood firm in defense of America’s democratic system and who unlike Trump didn’t prioritize their own political goals or personal vanity over preserving faith in that system.

His integrity, and willingness to stand up to a powerful President threatening vengeance against party members who cross him, contrasts with the expediency of Trump’s Republican allies on Capitol Hill.

The shockwaves of tapes of Trump’s call on Saturday with Republican Secretary of State Brad Raffensperger did convince some Washington Republicans to reinforce their warnings that the President was doing deep damage to the republic.

His actions have effectively split the party in two between factions who support democracy and the Constitution, and those who are willing to trash core American principles out of loyalty to a lawless President.

Pennsylvania Sen. Pat Toomey, who is shielded from Trump’s wrath by previously deciding not to run for reelection, called his call with Raffensperger “a new low in this whole futile and sorry episode” and condemned the “relentless pressure, disinformation, and attacks” from Trump.

The No. 3 House Republican — Rep. Liz Cheney, who is breaking with her leadership colleagues — told CNN the call was “deeply troubling.” House Minority Leader Kevin McCarthy, however, said in the friendly confines of Fox News that Trump was simply concerned about the “integrity” of elections.

The Republican insurrection will fail because Democrats control the House and there is not a majority in the Senate to reject the election results. But the entire stunt will deeply damage the legitimacy of Biden’s new presidency in the eyes of Trump voters at a moment of deep national crisis.

During his speech Monday, Trump publicly leaned on Vice President Mike Pence to come “through” when he presides over the certification of Biden’s victory, although his role is purely ceremonial and he does not have power to change the election result.

Alarm at the President’s behavior and the lasting damage it will wreak on Capitol Hill, prompted a group of 170 CEOs on Monday to warn that the election was over and that a peaceful transfer of power was vital.

Washington is bracing for the arrival of thousands of Trump supporters ahead of mass rallies meant to intimidate the lawmakers who will gather for the formal certification of the election.

The President is now expected to address one of the rallies himself, a factor that will likely further hike concern over rising tensions that have prompted city authorities to call in the National Guard.

A nervous night for Georgia Republicans

Republican strategists viewed Trump’s arrival in Georgia in the eve of what looks like two neck-and-neck races with dread, wondering whether he would stick to the script.

The fear was that the President’s assaults on the integrity of the election process would simply convince his supporters — who the GOP needs to show up in large numbers on Tuesday that the election was already rigged.

“If you’re a Georgia voter, if you want your values reflected by your election officials, I strongly beg and encourage you, go vote tomorrow. Do not let anybody discourage you. Do not self-suppress your own vote. Do not make a self-fulfilling prophecy out of doing this. Don’t let anybody steal your vote that way,” Sterling said.

On the other hand, the President, who enjoys an almost mystical connection with his base voters, has a strong record of lifting Republican candidates in one-off elections.

He offered a strong endorsement of both Loeffler and Perdue and frequently lambasted their opponents.

If Republicans win one of the two seats on Tuesday, Senate Majority Leader Mitch McConnell will retain a narrow majority in the chamber and have the ability to serve as a roadblock to Biden’s ambitious agenda.

But if Democrats welcome Jon Ossoff and the Rev. Raphael Warnock to the Senate, Vice President Kamala Harris will be able to cast the deciding vote on tied bills once she takes office alongside the new President on January 20.

Biden made his own visit to Georgia on Monday in a bid to build on strong early vote numbers among Democrats in the Senate run-offs.

“By electing Jon and the Reverend, you’ll be voting to get the states the resources they need to get the vaccines distributed,” Biden said. “It’s a shame what’s happening now. It’s a literal shame.”

The President-elect argued that only two new Democratic senators would ensure new stimulus checks for Americans, join in reviving the economy hammered by Covid-19’s rampage and forge unity.

Trump did little to offer assurances that Tuesday’s election would be fair.

That was left to Sterling, the top state election official.

Election officials in Georgia are working overtime to debunk false claims by President Donald Trump and his allies that the Senate runoff results are untrustworthy. The most...
Read more
Top Stories