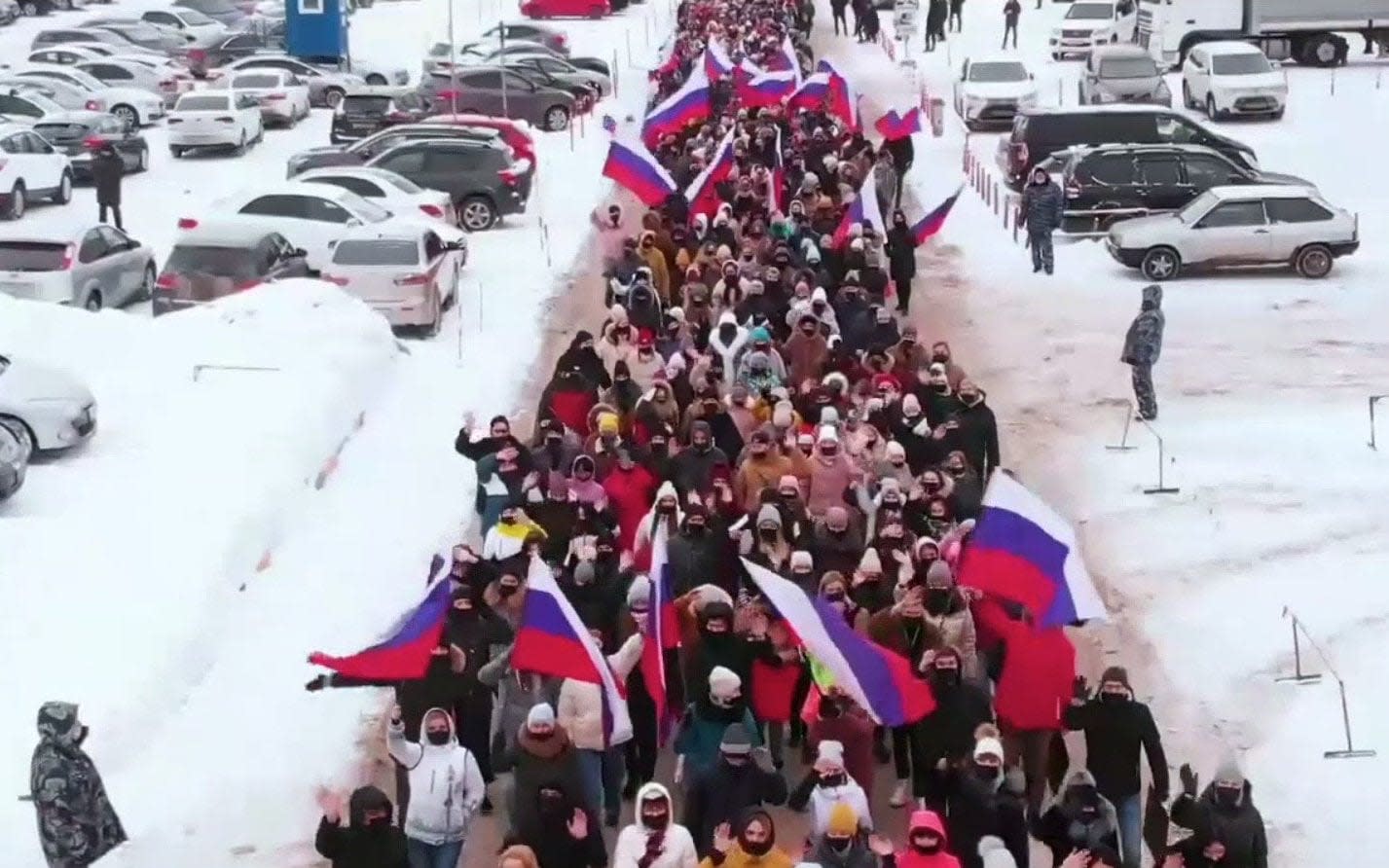 They came from all walks of life – paramedics, footballers, steelworkers and students – to march in a huge column for their leader, Vladimir Putin.

At least that’s how it seemed.

A slick new video showing young and old congregating under the name of the Russian leader has been exposed as one of a number of fake rallies concocted by the Kremlin.

Rattled by protests in support of opposition leader Alexei Navalny that have swept across the country, Mr Putin’s government appears desperate to prove his popularity is unscathed in a series of dubious demonstrations.

In Volgograd, formerly Stalingrad, where one of the videos was filmed, the crowd joins together after leaving their workplaces and football pitches to flash the torches on their phones at the site of one of the bloodiest battles of the Second World War. The clip, shared by local MPs from Mr Putin’s United Russia, wrapped up with a strapline across the screen: “We stand with you, Vladimir Vladimirovich!”.

But not long after the video was circulated two teachers from Volgograd said they were tricked into attending. “We thought we were there for Stalingrad, but it turned out we were there for Putin. They apparently felt too embarrassed to tell us,” one said.

Tens of thousands were in the streets in over 100 cities and towns for two weekends in a row, chanting “Putin is a thief” in a nod to Mr Navalny’s latest investigation about the president’s alleged palace on the Black Sea coast.

Over 11,000 have been detained in less than three weeks all over Russia for taking part in “unsanctioned rallies” but the Kremlin dismissed the protests as “insignificant.”

The protests have pushed some Kremlin officials into action but the pro-Putin videos reflect only a half-hearted attempt to counter the opposition message, Tatyana Stanovaya, a Russia analyst said.

Most of the Putin flashmob videos invited ridicule – and Mr Stanovaya does not see it as a genuine effort to convince anyone other than Mr Putin himself of people’s overwhelming support for him:

“Putin is the main target audience here: his administration will show him the videos to prove that people willingly take to the streets in his support,” she told the Sunday Telegraph.

In Moscow, students of the Kutafin Moscow State University of Law were invited to appear in a clip praising Russia’s coronavirus vaccine only to discover that they were supposed to wave Russian flags and chant verses in Mr Putin’s support.

“It was just absurd: My jaw dropped from how brazen and deceitful it all,” one of the students who was invited to the filming, told the Telegraph.

The original idea to demonstrate public support for the president clearly backfired, as the

“Very few young people support Putin, and this is not going to help,” another student said.

“You walk around the university and you see people watching this video: everyone is laughing out loud.”

Authorities in the oil-rich region of Tatarstan went for more low-key propaganda and invited a famous Russian rally raid driver to take part in a professionally-looking video where three trucks skid on a snow-covered field before the words “Putin Team” appear in the snow.

The video published on the Instagram account of the local governor drew a barrage of negative comments, largely summed up in one reply: “This video is great as long as you don’t watch the ending.”

All the cities where the pro-Putin videos were filmed saw major opposition rallies last month.

In Barnaul, a city in Siberia where an pro-Navalny protest on Jan 23 has been described as the city’s largest political rally in 15 years, a chemical factory put out a video in which the workers sing along a patriotic pop song before taking to the factory floor, white-blue-and-red flags in their hands and matching masks on their faces, to chant “Russia, Russia, there’s so much strength and power in this word!”

Russia has not seen this sudden outburst of public affection for President Putin since 2012 when he was running for office in the middle of major opposition protests that were spurred by reports of widespread vote-rigging.

Last week’s survey by the Levada Centre, Russia’s only independent pollster showed that 43 percent of Russia think that people protested in January because of “the growing unhappiness about the situation in the country” and that not much because of Mr Navalny’s arrest as such.

Levada also pointed to the highest number of people since 1998 who expected the protests to further expand while the number of those willing to rally themselves is still relatively low.

Spencer Platt/GettyDays before the trial of the officer charged with murdering George Floyd is set to begin in Minneapolis, the FBI has arrested a...
Read more
Latest News

The ConversationWhy using reconciliation to pass Biden's COVID-19 stimulus bill violates the original purpose of the processSpeaker of the House Nancy Pelosi and other...
Read more
Latest News

You can create the illusion of a bigger, more expensive home with the help of rugs. Getty ImagesA home stylist on TikTok is sharing...
Read more
Latest News

The New York TimesVirus Variant in Brazil Infected Many Who Had Already Recovered from COVID-19In just a matter of weeks, two variants of the...
Read more
Latest News

A Colorado man will never be able to legally hunt again in 48 states after pleading guilty to poaching more than a dozen animals,...
Read more
Latest News

Mom reports 6-year-old missing, but police say she ran him over and threw him in the Ohio River

Man dies after ambulance waiting to take him to hospital is stolen, Oklahoma cops say

Man dies after ambulance waiting to take him to hospital is stolen, Oklahoma cops say sourced via news.yahoo.com
Read more