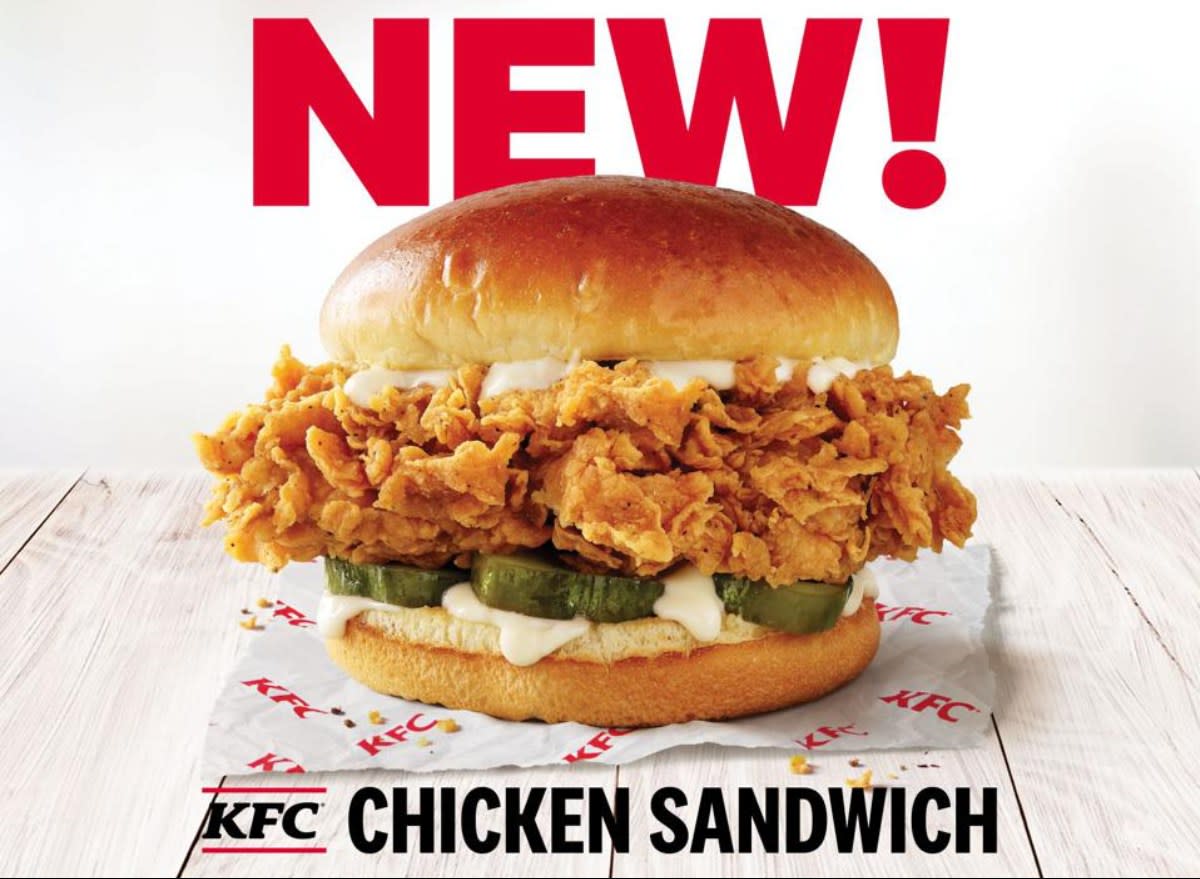 It’s out with the old and in with the new in 2021 for KFC’s famous chicken sandwich, the company says. The news comes a few days after McDonald’s announced they are adding three chicken sandwiches to its menu starting on Feb. 24.

The Crispy Colonel Sandwich is being replaced with the KFC Chicken Sandwich by the end of February because it is not “living up to our legacy as experts in fried chicken” the fast-food chain said according to Reuters. (This isn’t the only fast-food chain changing—McDonald’s Is Making These 8 Major Upgrades.)

Testing for the new sandwich took place in the Spring of 2020 in Orlando, Fla. where sales nearly doubled. And the sandwich itself is growing, too. It features a 25% larger white meat, doubled-breaded, and fried quarter-pound fillet than its predecessor. But it also has thicker crinkle-cut pickles and is dressed with either mayo or spicy sauce. It will cost $3.99.

The new entry into the chicken sandwich wars joins those from McDonald’s, as well as Popeyes, Chick-fil-A, Wendy’s, Culvers, and more. And the Louisville, Ky.-based chain—which was just named the most popular chicken fast-food chain—isn’t the only one to join the competition recently. Jack in the Box just launched their own version.

A Washinton state police dog made famous on TikTok was released from a hospital Monday after being critically injured last week. K9 Officer Arlo, a...
Read more
Lifestyle

Ashley Graham isn’t afraid to show off her “body-oddy-oddy-oddy.” The supermodel, 33, who is known for showing off her curves, took to Instagram on Saturday...
Read more
Lifestyle

Pizza is the world’s most popular takeaway dish: Report

The report analyzed Google search data in 109 countries, and "pizza takeaway" was the top food-related query people entered throughout 44 nations. Pizza was a top takeout search in its home country of Italy as well as Barbados, Argentina, Morocco and India, among many others.
Read more
Lifestyle

Why ‘Bachelor’ frontrunner Abigail Heringer is a big deal; who is the show’s first deaf contestant

Matt James’s season of The Bachelor is monumental in additional ways than one. Not only did Warner Bros. cast its first Black male lead...
Read more
Lifestyle

KN95s: These FDA-approved masks are just $2 a pop at Amazon

As case numbers continue to spike, face masks are more important than ever. The good news is that masks work well to keep the...
Read more
Lifestyle

Kyle Wilson, the Head of Brewing at Brooklyn Brewery, explains the science behind the bubbles on top of beer and how they impact your...
Read more
Lifestyle

Now you can watch Bobby Flay and Giada De Laurentiis explore Italy and its finest cuisines. The two celebrity chefs star in "Bobby and Giada in...
Read more
Lifestyle

The Detroit Lions finished their season at the bottom of the NFC North with a 5-11 record, but their fans still have something to...
Read more
Lifestyle

Warning Signs: You Have COVID Now

You might know some of the more common symptoms of coronavirus. The Centers for Disease Control and Prevention (CDC) lists a fever or chills,...
Read more