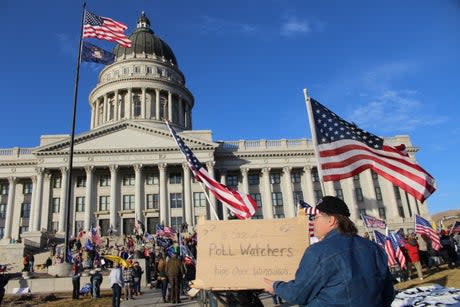 As pro-Trump extremists, which President-elect Joe Biden later would label “domestic terrorists”, laid siege to the Capitol building on Wednesday, similar “Save America” gatherings erupted across several US cities, from Atlanta, GA, to Topeka, KS — albeit on a less grand scale. Some 2,000 miles away from DC, Utah’s sleepy capital city — which as of late only pierces the national dialogue bubble when Mitt Romney or Real Housewives-related news ensues — also bore witness to a rally of its own.

Atop Salt Lake City’s Capitol Hill, approximately 400 people, some heavily armed, descended upon the Utah statehouse. There, speakers led the horde in chants and several prayers that urged a higher power to intervene in stopping Congress’ electoral count to confirm Biden’s victory. “We recognize that storm clouds have gathered around us. We recognize that patriots are gathered in this city and throughout the country,” a kneeling man behind the mic said. “This is a battle…” he continued, “[and] though it is easy for us to feel anger, it’s easy for us to feel violence, help us to have an outpouring of love that lets us go forth without fear.”

During its first couple of hours, the gathering was a mostly peaceful affair. That was until Rick Egan, a photographer with local daily The Salt Lake Tribune, was harassed and pepper-sprayed, an exchange that Salt Lake City Mayor Erin Mendenhall called an “attack on freedom of press and democracy” on Twitter; one that “should not be allowed to go unchecked.”

“Journalism is enshrined in the First Amendment of our country’s Constitution. And today on the lawn of Utah’s Capitol it was tossed aside,” Tribune executive editor, Lauren Gustus, wrote.

Even after the fracas, the rally went on uninterrupted, with members of the Proud Boys, as well as the locally bred Utah Citizen’s Alarm, gathered around its periphery, some chanting “All lives matter!” to a group of four Black Lives Matter supporters as a handful of state troopers looked on. At one point, one rally-goer accompanied by his black German Shepherd began shouting, “Black dogs’ lives matter” at the group, while another sarcastically sang “Kumbaya.”

Minutes later, as Black Lives Matter supporters made their way closer to the Capitol building, one Proud Boy ripped away their signature flag, ripping it apart while tossing its metal pole to the side.

“We’re better than this,” a woman trying to temper the altercation kept repeating.

Spencer Platt/GettyDays before the trial of the officer charged with murdering George Floyd is set to begin in Minneapolis, the FBI has arrested a...
Read more
Latest News

The ConversationWhy using reconciliation to pass Biden's COVID-19 stimulus bill violates the original purpose of the processSpeaker of the House Nancy Pelosi and other...
Read more
Latest News

You can create the illusion of a bigger, more expensive home with the help of rugs. Getty ImagesA home stylist on TikTok is sharing...
Read more
Latest News

The New York TimesVirus Variant in Brazil Infected Many Who Had Already Recovered from COVID-19In just a matter of weeks, two variants of the...
Read more
Latest News

A Colorado man will never be able to legally hunt again in 48 states after pleading guilty to poaching more than a dozen animals,...
Read more
Latest News

Mom reports 6-year-old missing, but police say she ran him over and threw him in the Ohio River