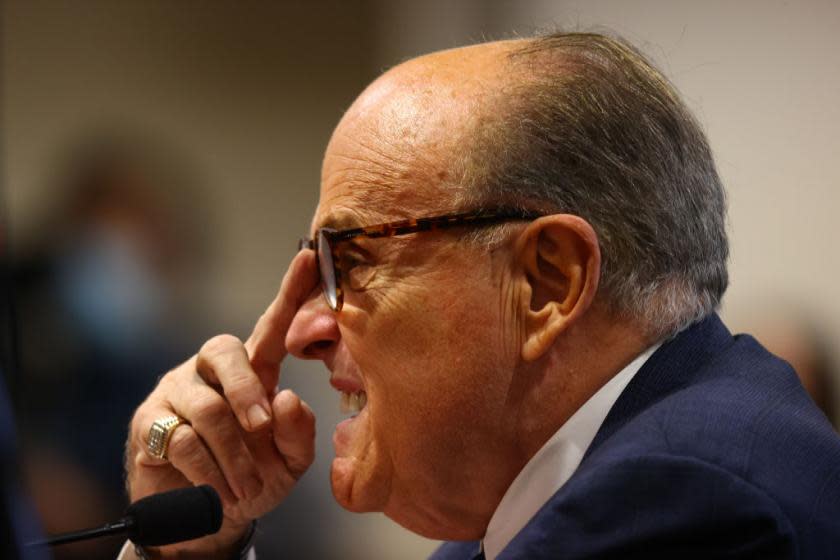 President Trump has been serving his last few days in premises in an empty White House, taking out his anger on his shrinking inner circle, The Washington Post reports. “Trump has never been more isolated than this week,” The New York Times confirms, “and the White House Counsel’s Office is not preparing to defend him in the Senate trial” after he was impeached Wednesday for incitement of insurrection.

Trump is specifically furious at Vice President Mike Pence, Senate Majority Leader Mitch McConnell (R-Ky.), and House Minority Leader Kevin McCarthy (R-Calif.), both newspapers report, but he’s also angry that his allies in conservative media and politics aren’t forcefully defending him after a mob of his supporters laid siege to the Capitol last week. “His relationship with lawyer Rudolph W. Giuliani, one of his most steadfast defenders, is also fracturing,” the Post reports, adding:

“TRUMP HAS INSTRUCTED AIDES NOT TO PAY GIULIANI’S LEGAL FEES, TWO OFFICIALS SAID, AND HAS DEMANDED THAT HE PERSONALLY APPROVE ANY REIMBURSEMENTS FOR THE EXPENSES GIULIANI INCURRED WHILE TRAVELING ON THE PRESIDENT’S BEHALF TO CHALLENGE ELECTION RESULTS IN KEY STATES. THEY SAID TRUMP HAS PRIVATELY EXPRESSED CONCERN WITH SOME OF GIULIANI’S MOVES AND DID NOT APPRECIATE A DEMAND FROM GIULIANI FOR $20,000 A DAY IN FEES FOR HIS WORK ATTEMPTING TO OVERTURN THE ELECTION. [THE WASHINGTON POST]”

Trump was “offended” by Giuliani’s $20,000-a-day request “and told aides not to pay him at all,” the Times confirms, adding that Giuliani denied making that request but it “was in writing.” And “White House officials have started blocking Mr. Giuliani’s calls to the president,” the Times adds, citing a Trump adviser. Read more about Trump’s deteriorating relationships and shrining circle of allies at The Washington Post and The New York Times.

Election Day may feel like an era ago but the presidential saga isn't over yet. Now it's time for Congress to take centre stage...
Read more
Latest News

Singapore's contact tracing app, TraceTogether, is under scrutiny after the country revealed the app's data could be accessed in criminal investigations by local police. An...
Read more